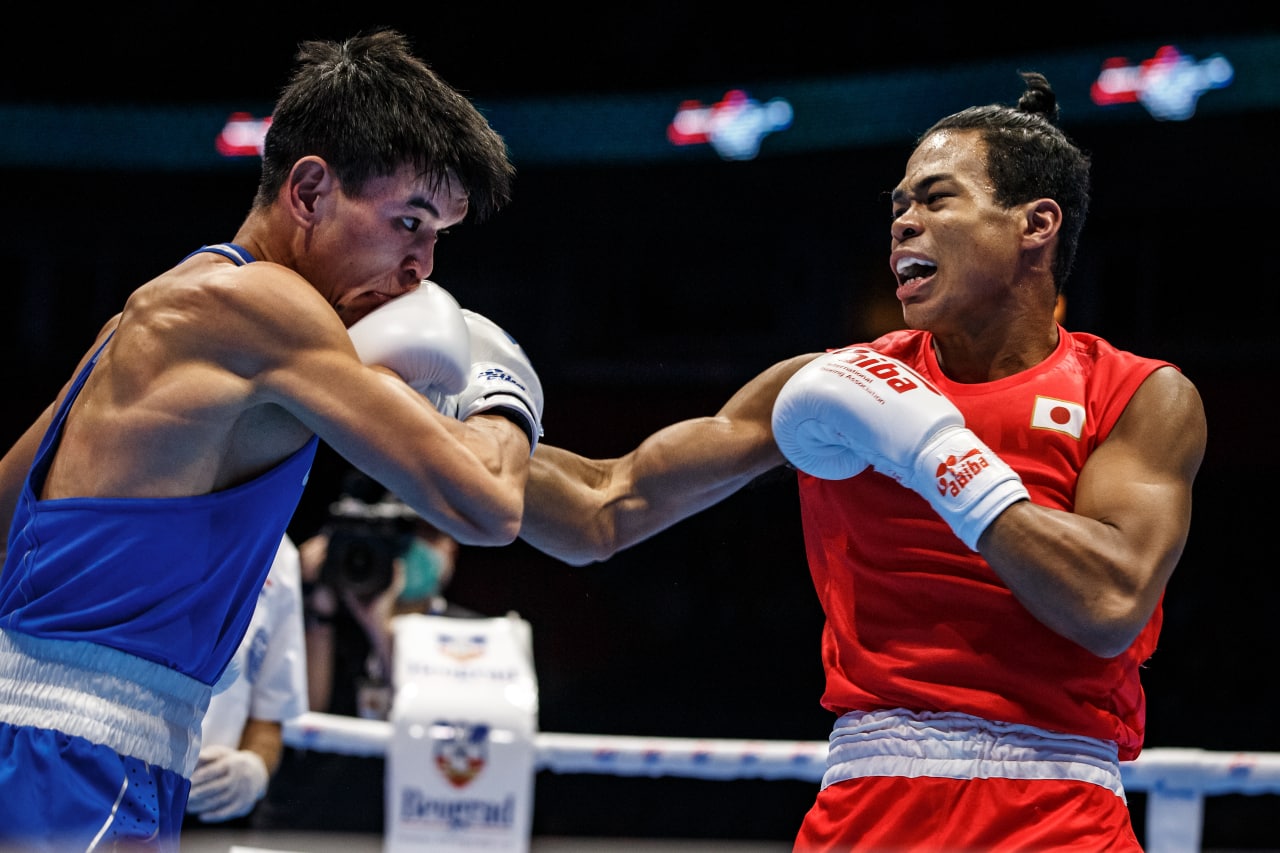 The first part of the semi-finals was held in the afternoon session of the 10th competition day at the AIBA World Boxing Championships in Belgrade where several anticipated contests delighted the crowd. The semi-finals of the minimumweight (48kg), bantamweight (54kg), lightweight (60kg), welterweight (67kg), middleweight (75kg), cruiserweight (86kg) and super heavyweight (+92kg) were in the program of the session. Japan has never had two finalists at the AIBA World Boxing Championships but their boxers Tomoya Tsuboi and Sewon Okazawa won their bouts today. Eleven nations from three Confederations have finalists after the first part of the semi-finals in Belgrade.

Kazakhstan’s Temirtas Zhussupov participated in his first international event in 2009 and claimed gold at the Amman 2013 ASBC Asian Elite Boxing Championships. The Kazakh boxer won a re-match in the quarter-final when he eliminated Uzbekistan’s two-time ASBC Asian Champion Nodirjon Mirzakhmedov. Today he met with Belarus’ Yauheni Karmilchyk who enjoys his stay at the minimumweight (48kg) and returned to his roots following the new categories have been introduced.

The Belarusian is smaller and he used an aggressive strategy in the first round to land his short-range punches. Zhussupov was quicker in the second round of their bout and took advantage on three scorecards. The Belarusian southpaw moved forward in the third round but he could not catch the fast Kazakh veteran. However, Karmilchyk looked satisfied with the bronze medal. Zhussupov will now meet for the gold medal with Thailand Boxing Federation’s Wuttichai Yurachai who eliminated Georgia’s Sakhil Alakhverdovi with clear dominance.

“This is my first AIBA World Boxing Championships final, so I am so happy and grateful to all people who supported me. I want to thanks for my coaches, my family and the Federation who all have done their best for me.”

Sabyrkhan and Tsuboi are the finalists in the bantamweight

Sabyrkhan dominated already in the first round against Akash Kumar who is India’s lone semi-finalist in Belgrade, and opened the bout in a different rhythm. The Kazakh southpaw landed three times more shots than his Indian opponent and his tempo was amazing. The Indian didn’t have effective responses to the Kazakh boxer’s speed which meant Sabyrkhan became finalist in his first-ever AIBA Men’s World Boxing Championships. Sabyrkhan’s final opponent will be Japan’s Tomoya Tsuboi who did a strong tactical performance against France’s taller Billal Bennama.

“We knew that the French is an experienced boxer but my coaches worked a lot on the strategy today and we found his weak points. We let him come to my distance. I am ready to beat my Kazakh opponent in the final.”

The next French boxer in action was Sofiane Oumiha, their team captain who claimed the gold medal at the Hamburg 2017 AIBA World Boxing Championships and arrived in Belgrade to repeat that performance. The 27-year-old French lightweight (60kg) boxer and his semi-final opponent, Dominican Republic’s Alexy Miguel De La Cruz both had the same fighting style, therefore, one of them must change the previous tactics.

The Dominican was patient in the opening minutes, he did not move ahead to Oumiha’s best distance but the French looked slightly better in the first round of their strategic game. De La Cruz is the first medallist from the Dominican Republic since the Belfast 2001 edition when Elio Rojas achieved the bronze medal. Oumiha moved ahead more in this bout and his tactical change delivered for him a success against the Dominican who did not take any risks today. The French will be facing Uzbekistan’s Abdumalik Khalakov for the gold medal, who walked over to the final following Iran’s Daniyal Shakhbakhsh was not able to fight today.

“We knew that our semi-final rival has good skills and excellent style and I had to be careful with him. This is my second final at the AIBA World Boxing Championships and I hope I can take the next gold medal back to home. My Uzbek opponent is amazing, our contest will be a fantastic one.”

Two outstanding technician boxers as Kazakhstan’s Ablaikhan Zhussupov and Japan’s Sewon Okazawa advanced to the semi-final in the welterweight (67kg) which was the final-level bout. Zhussupov moved back a few steps quickly when Okazawa went forward and landed counter-attacks. The Japanese mostly worked from a longer range. Zhussupov, who claimed two bronze medals in the previous editions of the AIBA World Boxing Championships, felt comfortable in the middle of the ring against the super quick Japanese but received hooks during the exchanges. The 26-year-old Okazawa showed world-class performance after the first preliminary round but due to Zhussupov’s amazing efforts in this anticipated contest, only the final round could decide their bout. Okazawa had to change his training venue in April 2020 due to a flood in Japan but everybody supported his preparations to the big Championships and a result is a place in the finals.

“I am happy that I was better today against such a strong rival as Ablaikhan Zhussupov. I am sure next time we will meet only in the final, he is such a good boxer. I have the power to win the gold medal of the Championships against my US opponent. I am better round by round at the event.”

Hernandez and Bizhamov are the finalists in the middleweight

Cuba’s Yoenlis Hernandez joined the elite national team at the end of 2019 but due to the Covid-19 pandemic, he could compete only in a few international competitions. The Cuban middleweight (75kg) boxer is taller than Italy’s Salvatore Cavallaro who impressed with his four victories in Belgrade following his serious injury. The Italian southpaw had good defense in the bout but he did not had enough power in the attacks. The 24-year-old Cuban stopped the Italian attacks with jabs and body shots, and that was enough enough to win their semi-final. Hernandez will now meet for the gold medal with RBF Team’s Dzhambulat Bizhamov who stopped Thailand Boxing Federation’s 20-year-old Weerapon Jongjoho.

“I prepared to this semi-final so much mentally to control the contest from the first round and I am happy that I could win it. I used my technical skills and my long hands to beat the Italian.”

Brazil’s Keno Machado won two out of the three top youth championships in 2018 and he was included in their elite national team in 2019. After two and half years of elite experience and strong results, the 21-year-old Brazilian had all of the tactical knowledge to share his power well in the semi-final of the cruiserweight (86kg). Machado controlled the exchanges in the first round against Belgium’s Victor Schelstraete who reached his nation’s first-ever medal in the history of the AIBA World Boxing Championships. The Belgian moved forward more in the second round landing hooks from a closer distance but Machado had the right responce to these actions. Machado is Brazil’s first finalist since Robson Conceicao’s amazing performance in the Almaty 2013 AIBA World Boxing Championships.

“It was a hard fight but I used my own game, kept my Belgian opponent on long distance in this semi-final bout. It is a great feeling to be in the final but I want to win that against the Cuban-born Azeri boxer.”

Armenia’s Davit Chaloyan competed for the country in several events between 2013 and 2017 but after three years of break, he returned to the ring and claimed a gold medal at their National Championships. The Armenian had longer reach than Azerbaijan’s EUBC European Youth Champion Mahammad Abdullayev but he moved forward and attacked more than his rival. Both super heavyweight (+92kg) boxers were more patient than expected in the first round and waited for the best attacking moments. In that ‘chess game’ Chaloyan looked better. The Armenian was as quick as a middleweight boxer and his speed decided their semi-final in Belgrade. Chaloyan will now meet for the title of the heaviest weight class with RBF Team’s Mark Petrovskii who eliminated Trinidad & Tobago’s hero, Nigel Paul.